Note: This is the first of a three-part series of blogs examining the findings and implications of a report, “Towards Net-Zero Energy Systems in Canada: A Key Role for Hydrogen,” by The Transition Accelerator. Part 2 will focus on the key role of hydrogen in reducing greenhouse gas emissions. Part 3 will look at the domestic and export economic opportunities for hydrogen.

The Alberta government’s new natural gas strategy includes large-scale hydrogen production, with a goal to be exporting clean hydrogen across Canada, North America and globally by 2040. As Canada and many other countries pursue hydrogen strategies, Alberta’s several advantages make it strategically well positioned to take a global lead in producing low- or zero-emissions hydrogen as a transportation fuel.

Alberta already produces most of Canada’s hydrogen. Nationwide, about 8,200 tonnes of hydrogen are produced per day, predominantly by steam methane reforming of natural gas. This so-called ‘grey’ hydrogen is used as an industrial feedstock to make synthetic crude from oil sands bitumen, nitrogen fertilizer and refined petroleum products. Grey hydrogen can be turned into ‘blue’ hydrogen, by capturing the byproduct carbon dioxide from hydrogen produced from natural gas and permanently storing this CO2 underground and/or using it in enhanced oil recovery operations. Alberta is a recognized international leader in these technologies.

In a report by The Transition Accelerator, “Towards Net-Zero Energy Systems in Canada: A Key Role for Hydrogen,” blue hydrogen is defined as 90% carbon capture and storage from steam methane reforming. Alberta also has a globally competitive cost advantage in blue hydrogen.

“Canada is internationally recognized as among the world’s lowest-cost sources of ‘blue’ and ‘green’ hydrogen,” says Dr. David Layzell, PhD, energy systems architect at The Transition Accelerator, and professor and director of the Canadian Energy Systems Analysis Research initiative at the University of Calgary. Green hydrogen is produced from low-carbon electricity (hydro-power, nuclear or renewables) through electrolysis of water.

For a net-zero emission energy system to be compelling, hydrogen should ideally be priced competitively with the incumbent carbon-based fuel option. To meet this criterion, the retail price for low- or zero-carbon hydrogen fuel should be $3.50 to $5 per kilogram of hydrogen. In provinces such as Quebec, Manitoba, and Ontario, which have ample low-carbon electricity, green hydrogen could be produced for $2.50 to $5 per kilogram, according to an analysis in The Transition Accelerator’s report.

For producing blue hydrogen, the Western Canadian Sedimentary Basin underlying Alberta (as well as northern British Columbia and southern Saskatchewan) is the ideal location due to the supply of low-cost natural gas, plus the right geology to safely store and/or utilize the CO2. Blue hydrogen could be produced in Alberta for $1.50 to $2 per kilogram, which includes the cost of carbon capture and storage.

Levelling the playing field for hydrogen

“However, the distribution and retail of hydrogen is associated with higher costs than for diesel,” Layzell notes. Economically viable fueling stations in Alberta could deliver at least 2 tonnes of blue hydrogen per day at a retail price of about $3.50 per kilogram. However, the sustainable economic viability of hydrogen fuel would require supportive policy instruments.

Policies implemented by the federal and Alberta governments, as well as other provincial governments, assign a value to carbon to incentivize greenhouse gas emissions (GHG) reductions. Such policies could generate carbon credits from the lifecycle benefits of using blue or green hydrogen to displace fossil fuels and their resulting GHG emissions.

For example, carbon credits worth $200 per tonne of CO2e would mean that displacing natural gas (as an industrial feedstock, for example) with blue or green hydrogen may reduce the retail cost of hydrogen by up to $1 per kilogram, according to The Transition Accelerator’s report.

“Canada’s abundant resources for blue and green hydrogen production, combined with a number of existing and emerging policies and standards, can make it possible to produce, distribute and retail the hydrogen at a price that is competitive with the fossil fuel alternatives,” Layzell says. 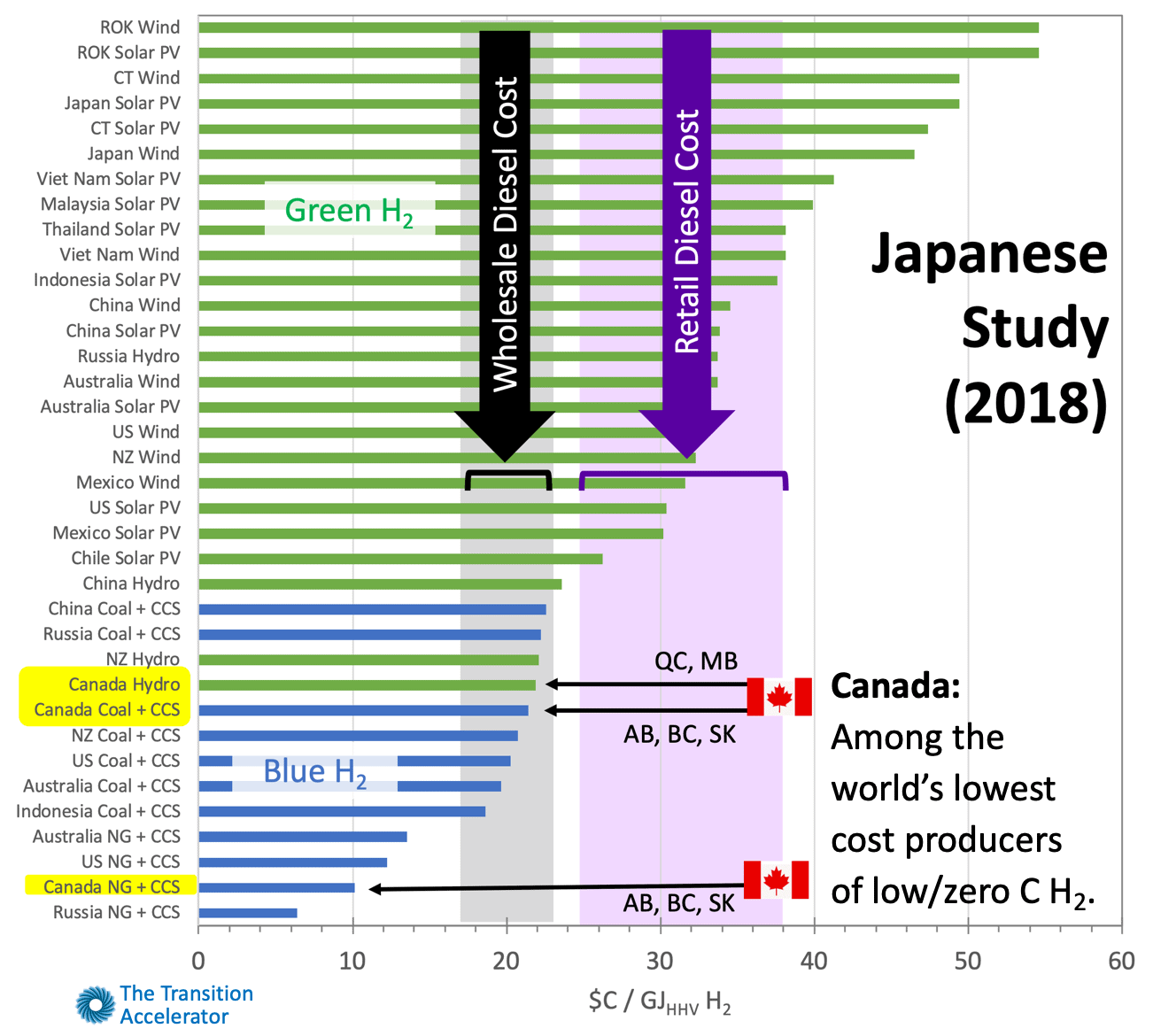 However, a “vicious cycle” is currently preventing the significant use of hydrogen as an energy source and the emergence of a hydrogen economy in Canada, Layzell notes.

The Transition Accelerator’s report indicates Canada can meet this challenge by establishing “hydrogen nodes” in regions across the country where the following criteria are met:

Alberta’s Industrial Heartland region, adjacent to northeast Edmonton, offers several advantages for building Canada’s first blue hydrogen node. These include an available supply of hydrogen, an operating carbon capture and storage facility, and a CO2 transportation pipeline with surplus capacity. The region also has large commercial freight operations being influenced by disruptive forces and that are poised for positive change.

“This Industrial Heartland node would supply hydrogen to hydrogen fuel cell/electric heavy-duty trucks in the commercial freight transportation sector, and could be expanded outward,” Layzell says. “It’s basically targeting and growing an energy system in a region through strategic investments to create a new value chain.”

The sub-regional scale of deploying hydrogen nodes across Canada can focus public and private investment on creating small, but viable zero-emission energy systems that will grow over time to produce the transformative change needed for Canada’s energy systems, he says.

Deploying and growing the hydrogen nodes should be coordinated with the opportunity for Canada to provide zero-emission hydrogen to other nations wanting to decarbonize their energy systems, Layzell says. “In doing so, Canada can become a global leader in the transition to a net-zero emission energy future.”