NOTE: This is the third of a three-part series of blogs examining the findings and implications of a report, “Towards Net-Zero Energy Systems in Canada: A Key Role for Hydrogen,” by The Transition Accelerator. Part 1 focused on Alberta’s advantages for producing hydrogen. Part 2 examined hydrogen’s key role in reducing greenhouse gas emissions.

Transitioning to low- or zero-emissions hydrogen fuel, and away from carbon-intensive fossil fuels, presents a significant domestic and export economic opportunity for Alberta and Canada. Making this transition will require a pan-Canadian end-use hydrogen market equivalent to 27% of the primary energy needs of Canada in 2050, equivalent to 64 kilotonnes of hydrogen per day, according to the report, “Towards Net-Zero Energy Systems in Canada: A Key Role for Hydrogen,” by The Transition Accelerator.

“To go to hydrogen is basically about a transformative change. It’s about fundamentally changing and building a whole new energy system that is economically viable,” says Dr. David Layzell, PhD, energy systems architect at The Transition Accelerator, and professor and director of the Canadian Energy Systems Analysis Research initiative at the University of Calgary.

The hydrogen Canada would need could be supplied as ‘blue’ hydrogen, using 4,490 petajoules natural gas per year, according to The Transition Accelerator’s report. This is equivalent to 72% of Canada’s current natural gas production. The blue hydrogen (defined as 90% carbon capture and storage [CCS] from steam methane reforming of natural gas) produced would be about eight times the current production of hydrogen from natural gas in Canada. The CCS required for this amount of blue hydrogen would be about 203 megatonnes of carbon dioxide per year.

Meeting this domestic demand for hydrogen would require a mixture of both ‘blue’ and ‘green’ hydrogen. However, the current economics of production and resource availability suggest that initially there would be more blue hydrogen than green hydrogen, Layzell says. Eventually, as primary energy resource or CCS storage space becomes limiting and renewable power generation has an increasing share in the public grids across Canada, green hydrogen is expected to take a larger role. At a price of $2 per kilogram of blue hydrogen transported by pipeline, the potential contribution to Canada’s GDP is about $47 billion per year.

“Transitioning to a hydrogen-based energy system is not only economically and technically viable, it could actually create more economic value and a lot fewer environmental and health problems than our current energy system,” Layzell says.

If Canada is to transition to a net-zero energy system, it will be crucial that the U.S., Canada’s major trading partner, simultaneously transitions. Assuming this occurs, the current U.S. demand for Canadian crude oil and natural gas will decline as end-use demand shifts to low-carbon electricity or hydrogen. Canada currently exports about 5,300 petajoules per year (PJ/year) of crude oil to the U.S., which refineries convert into about 3,500 PJ/year of transportation fuels (gasoline, diesel jet fuel). The demand for these carbon-based fuels is expected to decrease as electricity, biofuels and hydrogen take market share in a net-zero energy future.

Future hydrogen markets, according to The Transition Accelerator’s report, include: 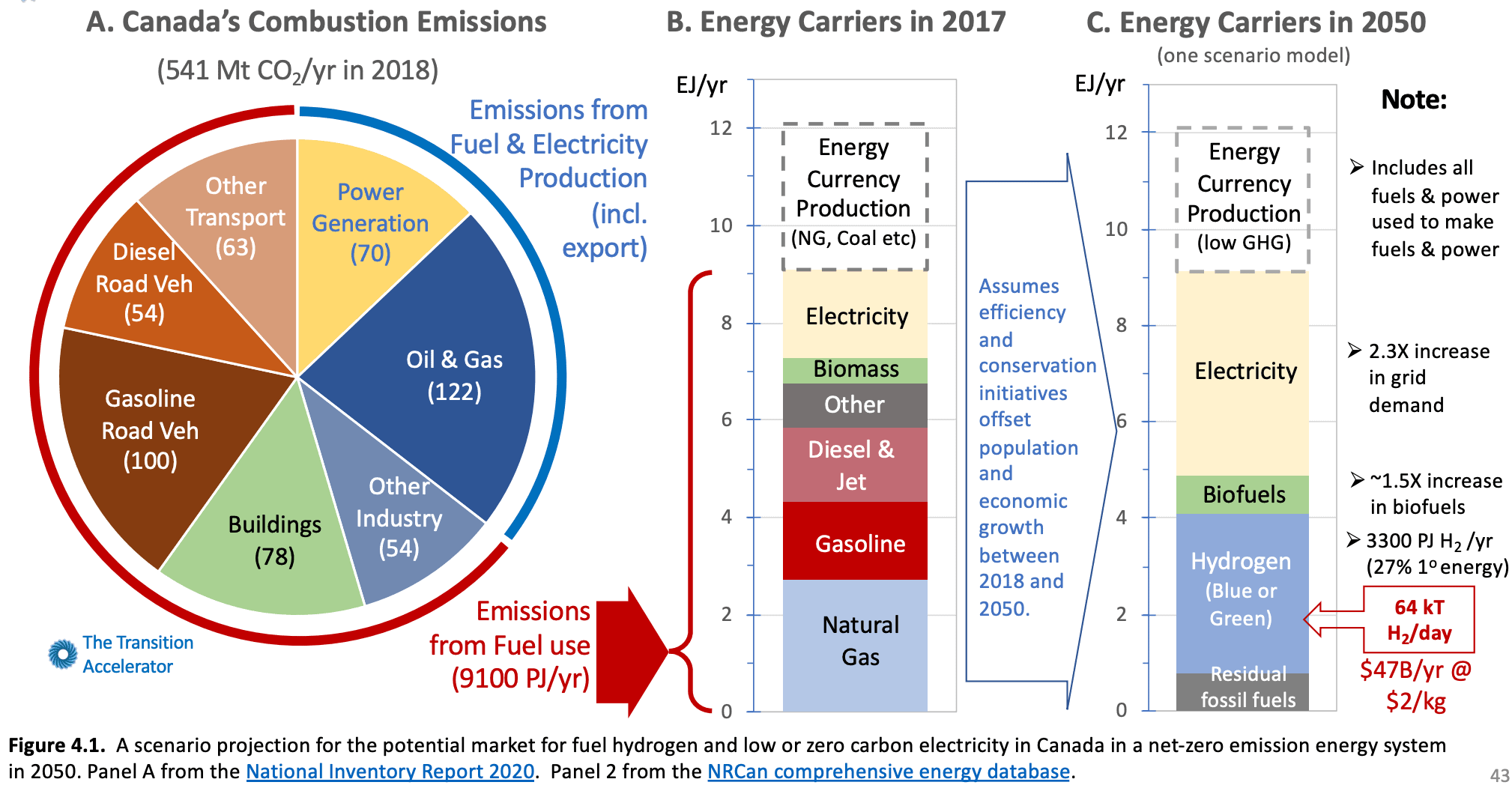 “Instead of pulling oil and gas out of the ground and selling it at these discounted prices, it makes more economic sense to produce and export hydrogen and get a much higher price,” Layzell says. “If Alberta can do it at a lower cost than anybody else, then this will attract the foreign investment, create the jobs, create the income for taxes, and it will help transition the oil and gas industry to a higher-value product.”

The potential market in the U.S. for hydrogen fuel, taking into account the improved drivetrain efficiency of hydrogen fuel cell electric vehicles, would be about 31 kilotonnes per day (kt/d). To put that number into perspective, California’s recent zero-emission vehicle policy targets 40% of heavy duty vehicles to be zero emission (i.e. electric or hydrogen-electric), post 2030. 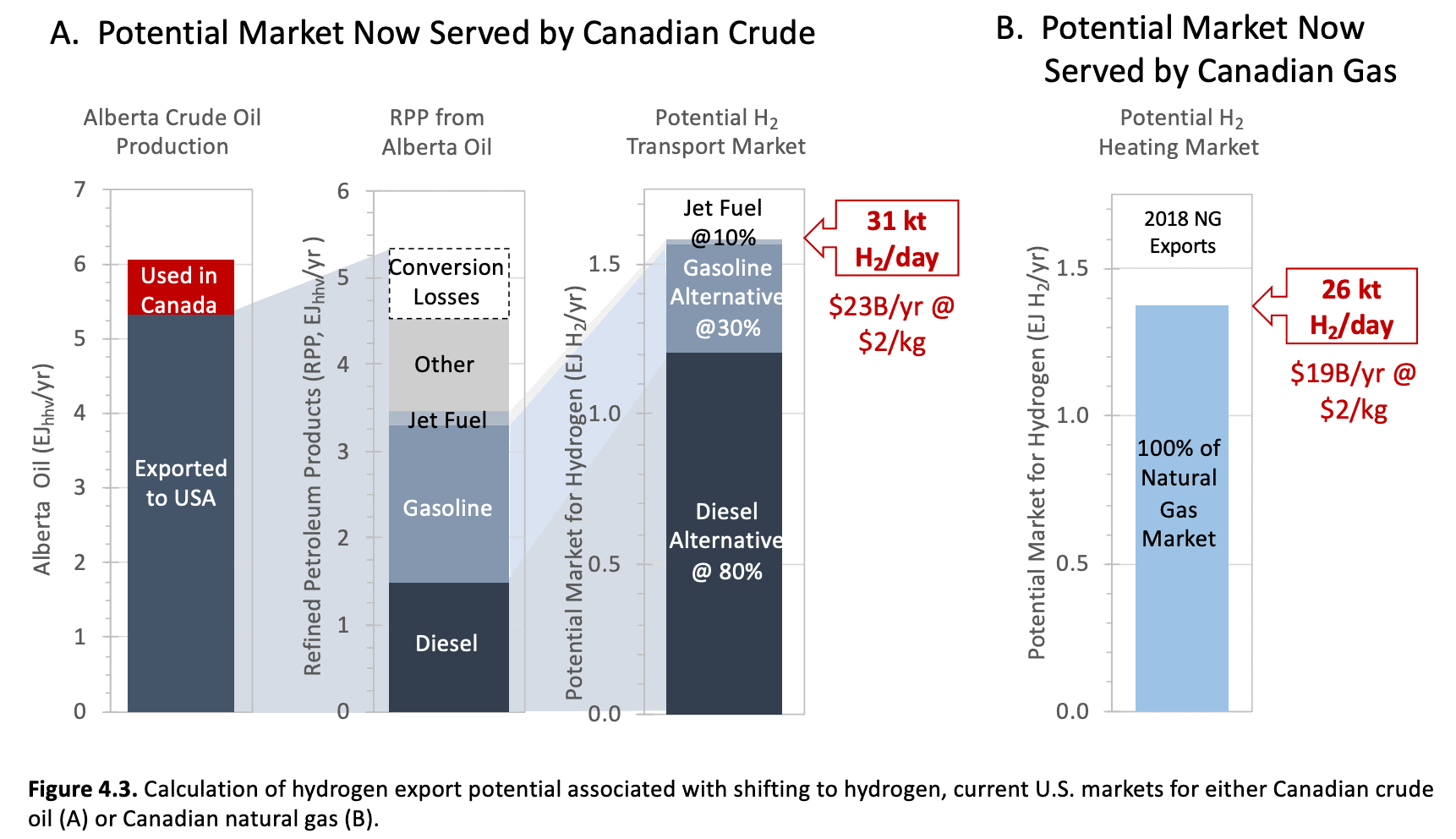 Assuming 80% of these Class 8 vehicles are hydrogen fuel cell electric trucks by 2050, this would create a market demand in California alone of 10 kt/d of hydrogen. In 2018, Canada also exported about 1,373 PJ/yr of natural gas to the U.S. If this market demand shifted to hydrogen, there would be demand for an additional 26 kt/d of hydrogen.

California recently announced policies to phase out natural gas demand in the state over the next 20 years. Currently, a pipeline carries Alberta natural gas to California. It may be worthwhile exploring the feasibility of converting this pipeline to hydrogen for export. The retail price in California for fuel cell-grade hydrogen is currently US$13 to US$17 per kilogram of hydrogen. Alberta should be able to deliver hydrogen to California at US$3 to US$4 per kilogram of hydrogen or less, according to The Transition Accelerator report’s analysis. 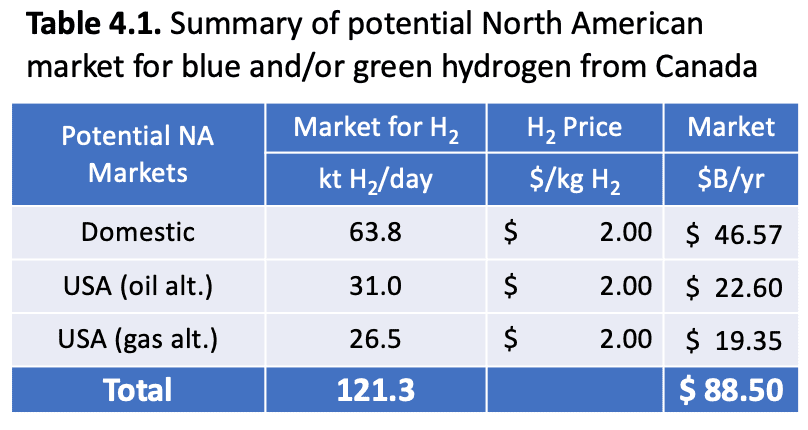 There are also likely to be significant overseas export markets for blue or green hydrogen in countries like Japan, South Korea and Germany, as they roll out their hydrogen strategies. These countries have limited domestic ability to produce hydrogen so they will need to import the zero-emission fuel from other nations. This hydrogen would need to be converted into a cryogenic liquid or ammonia and transported by ship.

Assuming Canada attracts 50% of the potential overseas market and the converted hydrogen sells for $3.50 per kilogram (a conservative price), the resulting market of 11.1 kt/d of hydrogen would contribute Cdn$14.2 billion to the Canadian economy. 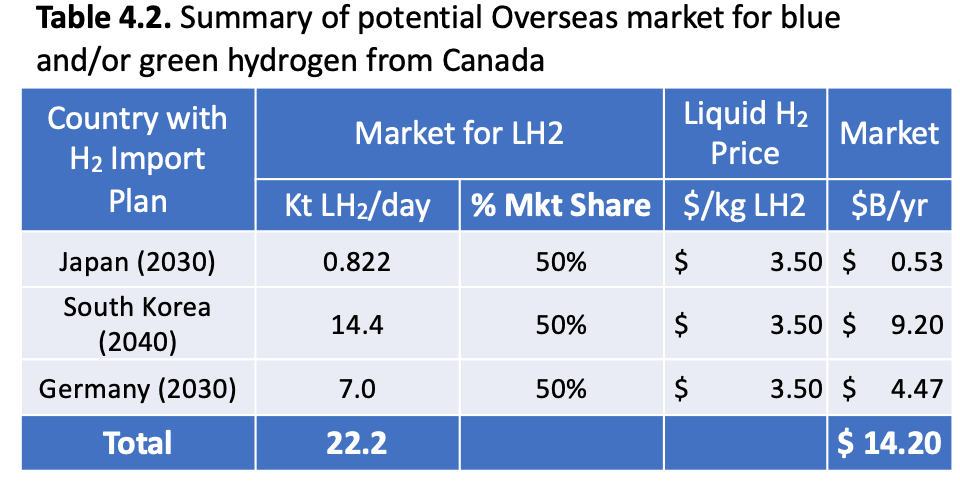 The Transition Accelerator report’s analysis suggests these overseas markets could easily double the demand for Canada’s zero-emission hydrogen production. Coupled with the North American market, this would generate a potential global market for Canada’s hydrogen of up to $100 billion per year.

“In a net-zero world that relies on hydrogen, Canada has this remarkable competitive advantage to be the global supplier of choice for hydrogen,” says Dan Wicklum, CEO of The Transition Accelerator. “We would win environmentally, by decarbonizing domestically and by providing zero-emission fuel to the rest of the world, and through that we also would win economically.”