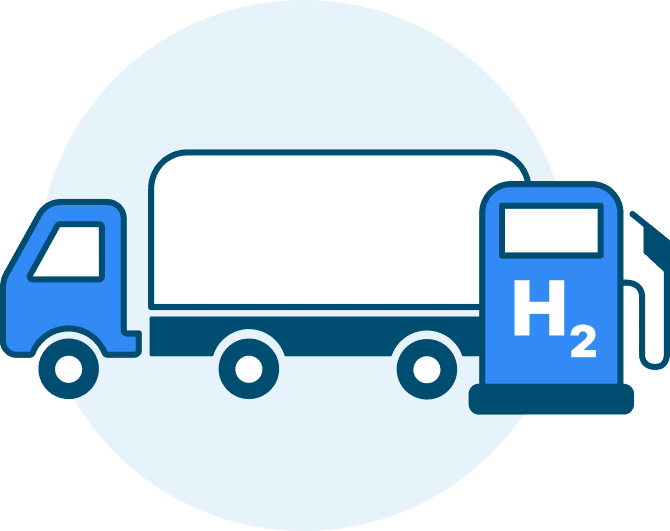 The Canadian federal and provincial governments have identified carbon capture, utilization, and storage (CCUS) as a major component of their strategies to reduce greenhouse gas (GHG) emissions. This report offers a review of CO2 storage projects in the Western Canadian Sedimentary Basin (WCSB), discusses the CO2 storage resources in the WCSB, identifies knowledge gaps, and suggests strategies for future CCUS deployment. Bringing the Hydrogen Economy Into Focus

We need a strategic, cross-sectoral approach to industrial transition now, based on Canada’s strengths and an assessment of likely opportunities in the decarbonizing global economy. This report presents the design and techno-economic analyses of new value chains for delivering hydrogen from centralized production sites to fueling stations supporting heavy duty vehicles in Canada, describing opportunities for decarbonization and economic growth. It also addresses the complexity and risks that are present, followed by recommendations to mitigate these risks and accelerate the adoption of hydrogen as a clean fuel. A key objective of the Assessing Workforce Requirements to Advance Canada’s Hydrogen Economy report is to establish a common, foundational understanding of the core occupations needed by hydrogen supply and demand value chains. It also identifies opportunities to leverage skilled and available labour and the degree to which an additional workforce must be developed, while also identifying the potential risks to meeting hydrogen’s talent needs. Towards Hydrogen: A Hydrogen HUB Feasibility Study for SouthEast Alberta

Towards Hydrogen, authored by Randy Litun, Hydrogen Hub Facilitator Consultant, outlines how Southeast Alberta is well-suited to become a major merchant hydrogen generation region and Canada’s second hydrogen hub. The report identifies and details the significant strengths and opportunities specific to the Southeast Alberta region, including high regional demand and its potential to be among the lowest-cost producers of low-carbon intensity hydrogen in North America. We need a strategic, cross-sectoral approach to industrial transition now, based on Canada’s strengths and an assessment of likely opportunities in the decarbonizing global economy. The transition to a global net-zero, low-carbon economy is underway and Canada must build the industries that will position the country for success. Otherwise, it risks being left behind by the strategic efforts of other countries, with considerable consequences for its future prosperity. The purpose of this ‘technical brief’ is to describe how to carry out techno-economic analyses for pure hydrogen pipelines, including their sizing, operating and cost estimating. The primary focus of this work is on the design and costing of pipelines transporting large volumes of hydrogen across large distances.
However, the principles discussed here can be used to explore the cost of smaller, shorter pipelines to serve
applications such as a fueling station or the blending of hydrogen into natural gas distribution systems. This technical brief supports the analysis stage (#3) in the Accelerator’s work to identify credible, compelling transition pathways to a vibrant hydrogen economy in Canada. It is intended to provide a tool that students, engineers, policy makers and entrepreneurs could use to assess the technical and economic feasibility of projects to produce, use and export low carbon hydrogen. The work also provides a technical reference to more cross-cutting Transition Accelerator Reports that will be published in the future and exploring regional or sectoral opportunities. Blog – Towards a Western Hydrogen Network

Canada has many strengths that can make it a hydrogen superpower. It is one of the lowest cost places to make low-carbon hydrogen in the world, and Alberta’s energy workers in particular already have the skills and expertise needed to lead the way in this emerging energy field. But a Canada-wide hydrogen economy won’t emerge unless the right conditions are set and additional hydrogen HUBs are created and linked across the country. That’s why we’re working to facilitate the next phase of development: a western hydrogen network.