NOTE: This is the second of a three-part series of blogs examining the findings and implications of a report, “Towards Net-Zero Energy Systems in Canada: A Key Role for Hydrogen,” by The Transition Accelerator. Part 1 focused on Alberta’s advantages for producing hydrogen. Part 3 will look at the domestic and export economic opportunities for hydrogen.

Alberta has several initiatives, such as the Technology Innovation and Emission Reduction Program, to reduce greenhouse gas (GHG) emissions while keeping its industry competitive. In November, the federal government unveiled proposed legislation to achieve net-zero GHG emissions in Canada by 2050. Hydrogen, used as a low- or zero-carbon fuel, can play a key role in these efforts. Like electricity, hydrogen is an energy carrier that produces no GHG emissions when consumed to provide energy services.

The end-use combustion of carbon-based energy carriers (gasoline, diesel, jet fuel, natural gas) is the largest source of GHG emissions in Canada, followed closely by the emissions associated with making these fuels. Therefore, achieving a net-zero energy system will require replacing these carbon-based fuels with energy carriers that produce no emissions at end use.

Hydrogen fits this bill perfectly, as long as it is produced with very low or no GHG emissions. This hydrogen would need to be used not only as an industrial feedstock, but as an end-use fuel supporting transportation, heat for buildings and industry, and power generation. One challenge, however, is there is currently no consensus on how to measure and rank the GHG emissions intensity of hydrogen.

“If the goal is to encourage the production and use of energy carriers with very low or zero GHG emissions, classifying the ‘colours’ of hydrogen – as is done now – should be replaced,” says Dr. David Layzell, PhD, energy systems architect at The Transition Accelerator, and professor and director of the Canadian Energy Systems Analysis Research initiative at the University of Calgary.

Ideally, a classification system for the various grades of low- or zero-GHG hydrogen would be based on the maximum life cycle GHG emissions per kilogram of hydrogen, he says. In addition, standards and regulations related to hydrogen are needed, including safety regulations for hydrogen fueling stations and monitoring, and around carbon capture, utilization and storage associated with hydrogen production, Layzell says.

Canada currently produces about 8,200 tonnes of so-called ‘grey’ hydrogen per day, predominantly by steam methane reforming of natural gas. This grey hydrogen production, used as an industrial feedstock to make synthetic crude oil from oil sands bitumen, nitrogen fertilizer and refined petroleum products, results in GHG emissions of about 9 kilograms of CO2 equivalent (CO2e) per kilogram of hydrogen associated with the hydrogen production. Another 1.72 kilograms of CO2e are associated with the upstream (natural gas extraction) and infrastructure emissions.

There are various ways to capture and store the byproduct CO2 to make ‘blue’ hydrogen from natural gas. In the recent report, “Towards Net-Zero Energy Systems in Canada: A Key Role for Hydrogen,” by The Transition Accelerator, blue hydrogen is defined as 90% carbon capture and storage from steam methane reforming. The Western Canadian Sedimentary Basin underlying Alberta (as well as northern British Columbia, Alberta and southern Saskatchewan) is the ideal location for producing blue hydrogen. Alberta’s advantages include the supply of low-cost natural gas, plus the right geology to safely store the CO2 and/or use it in enhanced oil recovery operations.

Producing blue hydrogen would result in lifecycle GHG emissions (including production, upstream and infrastructure emissions) of about 2.8 kilograms of CO2e per kilogram of hydrogen, according to an analysis in The Transition Accelerator’s report. This is a similar GHG emission intensity to hydrogen produced from biomass and less than ‘green’ hydrogen produced with solar photovoltaic technology, if the life cycle emissions associated with making the solar panels are included.

In comparison, life cycle emissions associated with green hydrogen produced from wind, large hydro-power and nuclear energy are about 1 kg CO2 per kilogram of hydrogen. The carbon footprint of hydrogen made from electricity produced by fossil fuels ranges from 23 to 53 kg CO2e per kilogram. 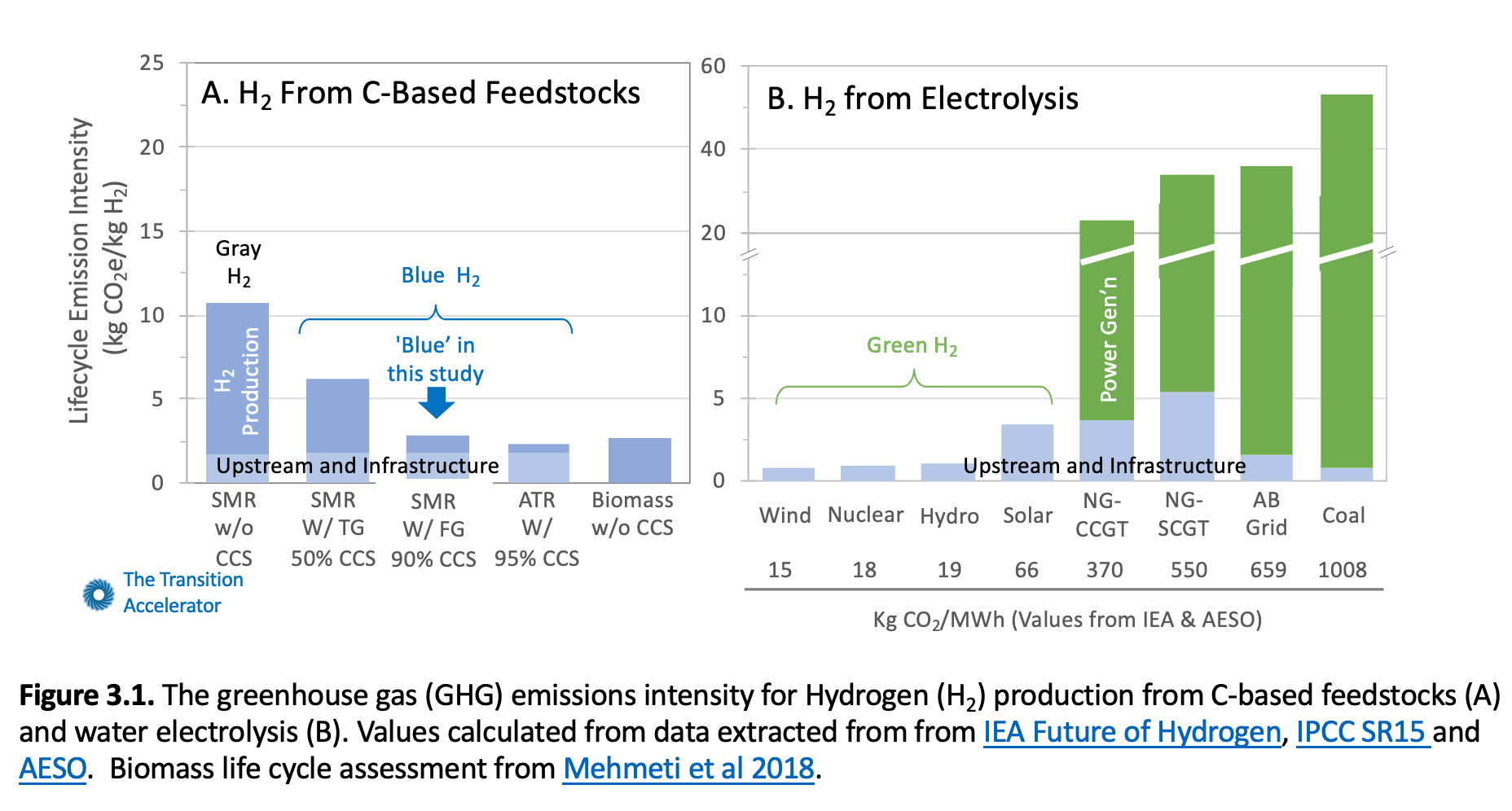 Hydrogen can also be used as a dual fuel with diesel (40 hydrogen to 60 diesel by energy content). In this case, the lifecycle GHG savings are about 32% compared with a vehicle using only diesel fuel. Compared with diesel fuel, over the operational lifetime of vehicles for intensive use (such as heavy-duty trucks hauling freight), each hydrogen fuel cell electric vehicle would reduce CO2 emissions by 1,129 tonnes. Each hydrogen-diesel dual-fuel vehicle would reduce CO2 emissions by 590 tonnes.

Therefore, in using blue hydrogen, it is possible to use carbon capture utilization and storage (CCUS) to achieve GHG emissions reductions that are 1.2 to 2.5 times greater than the magnitude of carbon sequestered during production (9 kilograms of CO2e per kilogram of hydrogen).

“That’s because hydrogen made from natural gas is displacing a more carbon-intense fuel and potentially achieving greater drivetrain efficiency in the vehicle,” Layzell says.

A net-zero energy future relying on hydrogen made from fossil fuels will require secure, permanent storage sites for byproduct CO2 of up to 100 to 300 tonnes of CO2 per year for decades.

A critical review needs to be done of past work on this topic, to bring it up to date with learnings from Alberta and around the world, Layzell notes. “With evidence on the magnitude of the opportunity and risks, and detail regarding how they will be managed, it is then essential to engage stakeholder communities and explore the potential to build support for CCUS and a hydrogen economy across Alberta and Canada.”