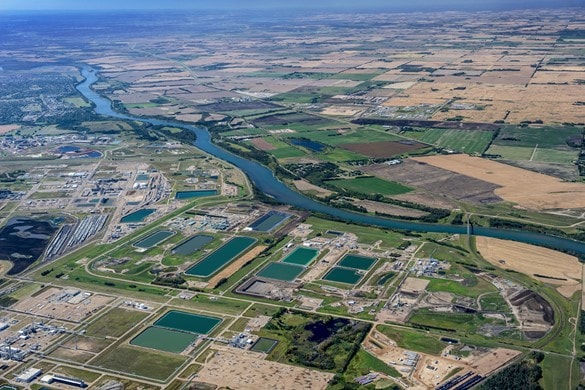 November 16, 2020, Edmonton, AB – Released today, the new report from Alberta’s Industrial Heartland Hydrogen Task Force lays out a roadmap for how to implement a hydrogen as fuel economy in the Edmonton Region. The Task Force was organized by The Transition Accelerator and led by Sturgeon County Mayor Alanna Hnatiw, Edmonton Mayor Don Iveson, Fort Saskatchewan Mayor Gale Katchur, Strathcona County Mayor Rod Frank and Lamont County Reeve David Diduck. With the release of its report, the Task Force has completed its mandate. The final report is available to read here.

Titled “Building a Transition Pathway to a Vibrant Hydrogen Economy in the Alberta Industrial Heartland,” the report has found that the Edmonton Region is well-suited to become Canada’s first hydrogen HUB, defined as an initiative to accelerate the development of a regional hydrogen economy that can later be connected to other HUBs across the country to achieve sufficient scale for a vibrant Canada-wide hydrogen economy. In particular, the region is a good place for Canada’s first HUB because of its access to low-cost natural gas, existing experience in hydrogen production and carbon capture and storage, a vast network of pipeline infrastructure, a large talent pool of engineers and tradespeople, and engaged industries, governments, First Nations and university and college academics. The report also complements the Government of Canada’s upcoming hydrogen strategy and the Government of Alberta’s recently released Natural Gas Vision and Strategy, which lays out a future vision for Alberta hydrogen production, use and export.

Among the main findings in the Task Force’s report are that heavy transport and heating are key to building demand for zero-emissions hydrogen. For instance, heavy-duty commercial and municipal vehicles such as fleets of trucks and buses are vital to creating demand in the region because they use large amounts of fuel and travel the same routes every day, requiring the construction of only a limited number of strategically-placed fueling stations. Heating residential and commercial buildings could also drive demand, as hydrogen can be blended with natural gas to lower greenhouse gas emissions. The report recommends that this demand for hydrogen be met through centralized large-scale blue hydrogen production potentially moved through repurposed abandoned or discontinued pipelines, which are crucial to reducing capital costs and reaching both key transportation corridors and neighbourhoods. Government investment may be required in the short-term, but the objective of the HUB is to drive the implementation of a hydrogen economy where the scale of supply and demand ensures that the full economic and environmental benefits of hydrogen will be realized without sustained public investment.

The Task Force’s report is supported by findings from a recent Transition Accelerator report, which establishes hydrogen as a vital component of Canada’s future clean energy system and the fuel of choice to decarbonize heavy freight, shipping, planes, space heating in cold climates and heavy industries such as steelmaking. The Transition Accelerator’s report also projects that Canadian hydrogen has a wholesale market potential of up to $100 billion a year, factoring in both domestic earnings and international export opportunities, and reveals that blue hydrogen can be made in Alberta’s Industrial Heartland for about half the wholesale price of diesel.

“Hydrogen will be a critical part of the future clean energy system, and the race is on to innovate value chains and business models to implement a vibrant Canadian hydrogen economy,” said Dan Wicklum, CEO, The Transition Accelerator. “Canada’s low-cost hydrogen offers a significant competitive advantage, and convening groups like the Alberta’s Industrial Heartland Hydrogen Task Force to implement regional hydrogen economies across Canada will allow us to join global leaders.”

“The synergies our region possesses through industry expertise, our educated and skilled workforce, carbon capture and storage and a supportive municipal alliance puts Alberta’s Industrial Heartland at a great advantage to build Canada’s first hydrogen HUB,” states Sturgeon County Mayor Alanna Hnatiw. “It’s a win-win not only for Alberta, but one that will reap many benefits for Canada nation-wide as the world continues moving toward reducing greenhouse gas emissions, and we’re ready.”

“The natural resources, pipelines, talent, leadership, and innovative spirit that made Alberta an energy powerhouse are the same aspects that will allow us to be a leader in the clean energy future,” said Mayor Don Iveson, City of Edmonton. “The regions that figure out how to quickly scale up the use and production of hydrogen as a fuel will win economically and environmentally in a quickly changing world.”

“Alberta’s government applauds the work of the Alberta Industrial Heartland Hydrogen Task Force in exploring the enormous potential of large-scale commercial hydrogen production in the province and for creating a well-thought out roadmap on how hydrogen could be integrated into our economy,” said Dale Nally, Associate Minister of Natural Gas and Electricity. “We have the resources, talent and experience to reap significant long-term economic benefits from this clean-burning fuel source, and we need to be ready to leverage them in the coming years. We are proud to partner with the Task Force on their work, which will be invaluable as we build our province’s roadmap for advancing a strong and profitable hydrogen economy.”

“We’re a vast country, and when it comes to producing hydrogen, there are advantages in every region,” said Seamus O’Regan, Canada’s Minister of Natural Resources. “This announcement is great news for Edmonton. This is how Canada will lead a global hydrogen economy.”