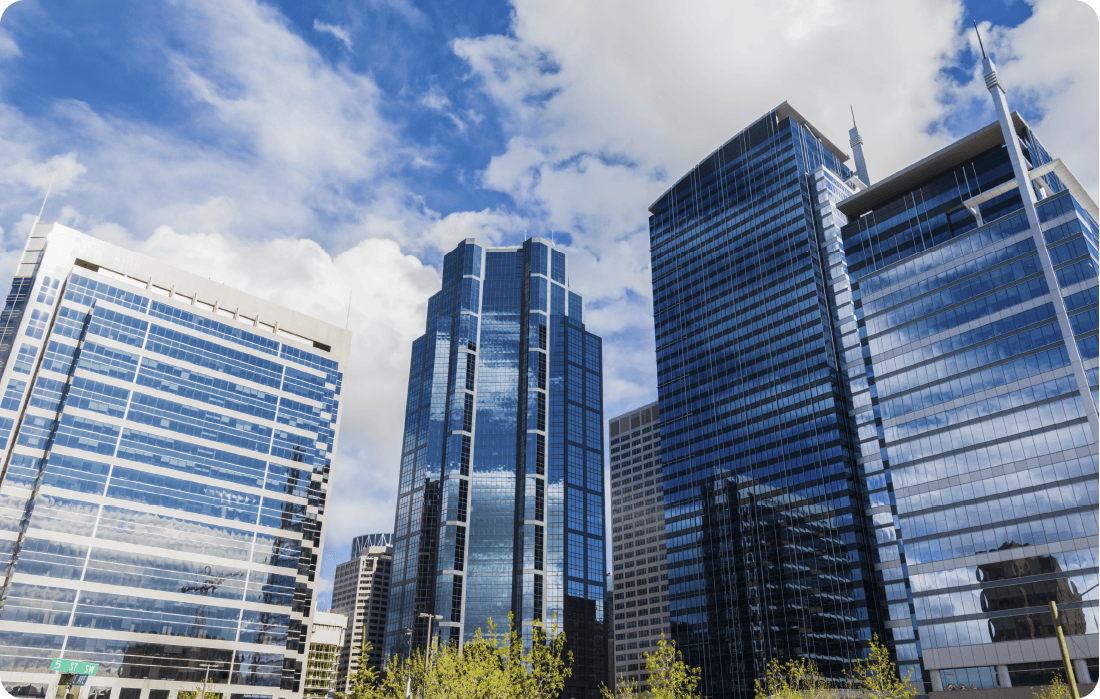 Blog: Alberta can Lead the Transition to a Net-Zero Canada – While Re-Energizing its Economy

By David B. Layzell PhD, FRSC and Jessica Lof MSc

The movement to a net-zero emission energy system in Canada and around the world offers Alberta the new economic opportunity that it has been searching for, concludes the latest report from CESAR and the Transition Accelerator.

Alberta’s vast fossil fuel and renewable resources can become a zero-emission energy fuel that can be used for transportation, heating or chemical energy. It can also be used to both generate and store electricity. That fuel is hydrogen, and Alberta can make carbon-free hydrogen at a lower cost than almost any place in the world.

This is especially the case for hydrogen made from natural gas by steam-methane reforming (SMR) coupled to carbon capture and storage (CCS). Defined as ‘blue’ hydrogen, Canada is ranked as the second lowest cost producer (next to Russia) in the Asia-Pacific region (Figure 1). Canada also has a competitive advantage in making ‘green’ hydrogen from water electrolysis using surplus hydropower in the provinces with large hydro resources (Figure 1).

The latest CESAR / Transition Accelerator report shows that in Alberta, ‘blue’ hydrogen production from natural gas (at $8-10/GJ) is about half the wholesale cost of diesel fuel (at $19/GJ) and one third the cost of ‘green’ hydrogen production (Figure 2 ). And recently, a Calgary company (Proton Technologies) claimed to be able to produce ‘blue’ hydrogen from heavy oil/bitumen reservoirs for about 1/6th the wholesale cost of diesel. Among all of the possible uses for zero-emission hydrogen in the Canadian economy, we see the existing diesel market as the ‘beachhead market’ for introducing this zero-emission carrier. 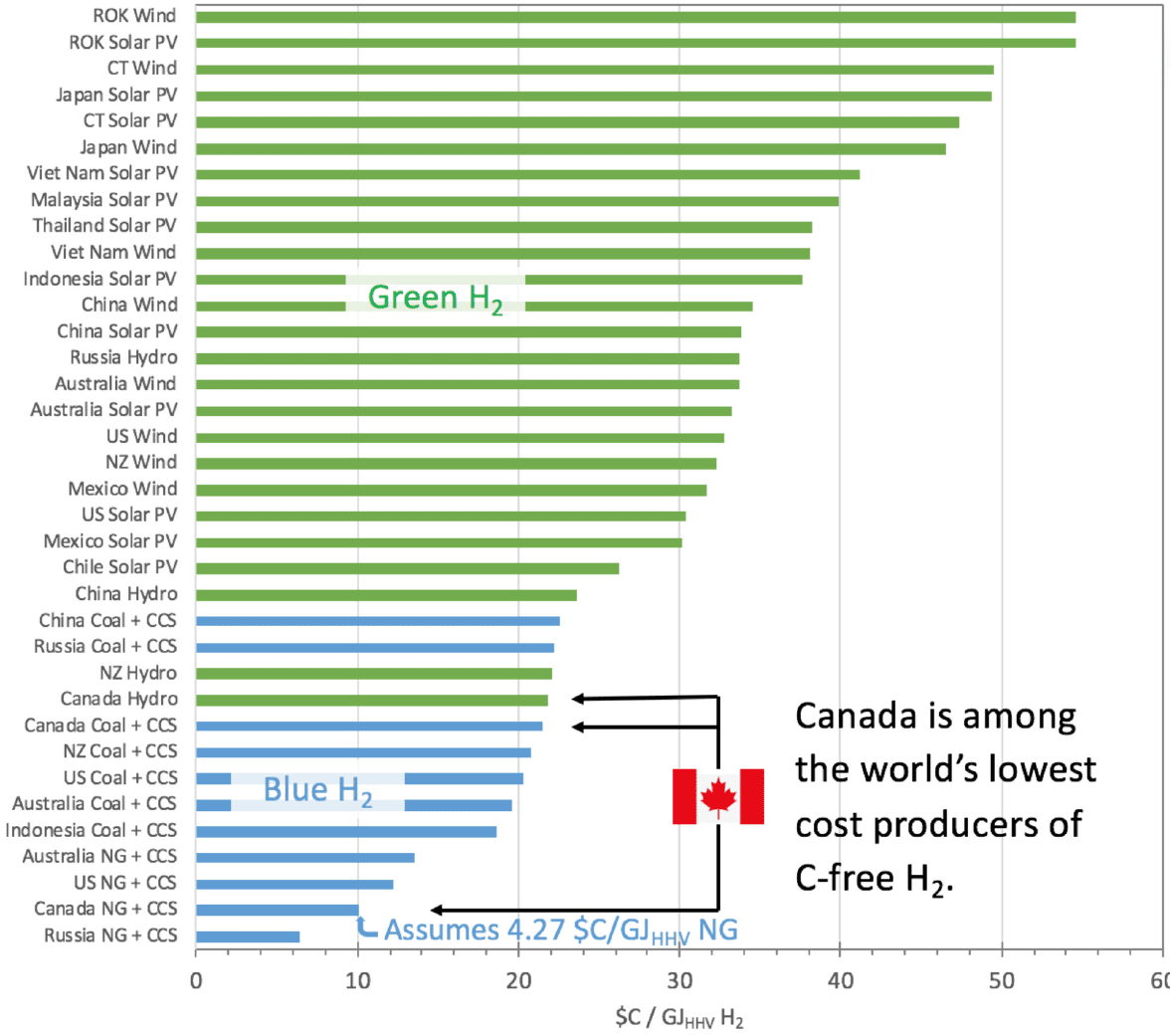 Figure 2. A comparison of the average pre-tax cost of diesel fuel (A), green hydrogen (B) and blue hydrogen (C). The cost numbers are separated into the embedded cost of feedstock energy (grey), the conversion cost to create a wholesale product (red), and the transportation and retail costs (green). For diesel, values are average of 2013-18, but for green and blue hydrogen production, the hydrogen costs are plotted against feedstock energy cost, and the transport and retail costs are shown as highly variable since they are linked to infrastructure availability and scale of demand. CCS, carbon capture and storage; SMR, steam methane reforming.

As an oil producing province, targeting diesel markets for the introduction of zero-emission hydrogen might seem crazy, but we live in a world of transformative change, and there is an increasing realization that companies and jurisdictions, must learn to disrupt themselves or be disrupted. Of course, it makes sense to self-disrupt in a way that plays to strategic advantages.

This was the thinking behind our latest report entitled “The Future of Freight Part C: Implications for Alberta of Alternatives to Diesel”. Recognizing that Alberta oil provides North America with nine times more diesel than that consumed in the province, this study asked whether alternative low or zero-emission fuels could make a similar or greater contribution to the economy of the province and nation, while addressing environmental objectives.

What About Bio-Based diesel? While bio-based diesel is a drop-in fuel with low GHG emissions, its use would not address the tailpipe air pollution problem associated with internal combustion engines. Moreover, Alberta does not have the biomass resources to meet even its own demand for diesel, let alone contribute to the supply of diesel for other jurisdictions. Therefore, as an energy resource, biomass feedstocks may be better suited to smaller markets (e.g. jet fuels), but bio-based diesel is not a credible, compelling or capable diesel alternative.

What About Plug-in Electric HD Vehicles? Plug-in, battery electric vehicles may be a viable alternative for moving light or medium duty loads over short distances. However, for heavy duty vehicles, especially those driving long distances, the weight of the batteries will compete with load capacity, and the long recharge time will undermine the economic prospect for the carriers. Consequently, the plug-in, battery electric alternative is not a compelling option for heavy freight transport in Canada. Even if these issues could be addressed, Alberta is already challenged by the need to reduce the carbon intensity of its public grid and adding the freight sector to the public grid would exacerbate that problem.

We concluded that neither bio-based diesel, nor plug-in electric drivetrains were credible, compelling or capable alternatives to the existing fossil diesel-ICE energy system in Alberta (see boxes for details).

In contrast, the heavy freight sector companies consulted for this project were most interested in hydrogen fuel cell electric (HFCE) vehicles since the technology promised rapid refueling, longer distances between refueling and the desirable performance of electric drive vehicles.

However, the lack of fuel infrastructure, and the absence of commercialized HFCE vehicles are major barriers, as are concerns regarding the cost of the fuel and vehicles should they become available.

“Alberta has both the fossil fuel and the wind/solar resource to make sufficient hydrogen to satisfy not only all of the diesel demand in the province, but nine (9) times that amount to be equivalent to what the province currently exports as crude oil for the North American diesel market.”

Two possible sources for the hydrogen were considered. Steam methane reforming of natural gas coupled to carbon capture and geological storage (i.e. ‘blue’ hydrogen), and electrolysis of water to hydrogen and oxygen using wind or solar generated electricity (i.e. ‘green’ hydrogen). Alberta has both the fossil fuel and the wind/solar resource to make sufficient hydrogen to satisfy not only all of the diesel demand in the province, but nine times (9X) that amount to be equivalent to what the province currently exports as crude oil for the North American diesel market.

Rather than waiting for new technologies to be developed and deployed, we argue that Alberta and Canada needs to start the journey towards a hydrogen economy using existing, off-the-shelf technologies. This will create a ‘pull’ for new technologies that could help to speed advances along the pathway, or even open-up new transition pathways.
One or more pathways need to be envisaged and analyzed while working with industry and government proponents to start the journey. Like chains, the strength of an energy system is only as good as its weakest link, so building a new energy system requires an integrated focus on all components of the energy system, linking demand to supply within a supportive policy and regulatory framework.

“We propose that Alberta works to create corridors of cost-effective hydrogen supply where there is also high demand for both HFCE drivetrains and other uses for the hydrogen.”

Given Alberta’s ability to produce low-cost, ‘blue’ hydrogen, we propose that Alberta create corridors of cost-effective hydrogen supply (retail at $C3.50-5.00/kg H2) where there is also high-demand for both HFCE drivetrains and other uses for the hydrogen. These conditions will establish the economies of scale to deploy distribution infrastructure, include fueling stations, pipelines and/or hydrogen liquefaction facilities.

Such a corridor would be self-sustaining and should attract companies developing and deploying technologies in support of the global transition to a hydrogen economy. Once established, these corridors can grow along major roadways, rail, and pipeline right of ways to other parts of the province, other provinces, the rest of North America and overseas markets.

Also, once hydrogen pipeline infrastructure is in place, there will be an opportunity to bring ‘green’ hydrogen into the new energy system. For example, the existence of a pipeline would support an alternative use of low-cost wind power generation for water electrolysis when it exceeds grid demand, thereby justifying more wind generation that would both lower the carbon intensity of the Alberta grid, and provide a valuable zero-emission transportation fuel.

Figure 3 offers an overview of how a new energy system based on ‘blue’ and ‘green’ hydrogen production could work together to not only decarbonize transportation, but also the electrical grid.

Building out credible and compelling transition pathways that are capable of achieving Canada’s emission reduction commitments will require answers to a number of questions (See Section 8.5 of the report), with an understanding that the answers may differ among regions in Canada.

Building transition pathways is also a team sport, requiring a shared vision on the nature of the objective, a shared appreciation of the resources available for the journey, and a shared conviction that the trip is worth taking. The transition to a zero-emission hydrogen economy will take decades, and many details of the pathway will not emerge until the journey is well underway. The current focus must be on the best way to get started and to ensure that a broad range of sectors and jurisdictions will participate in the journey. 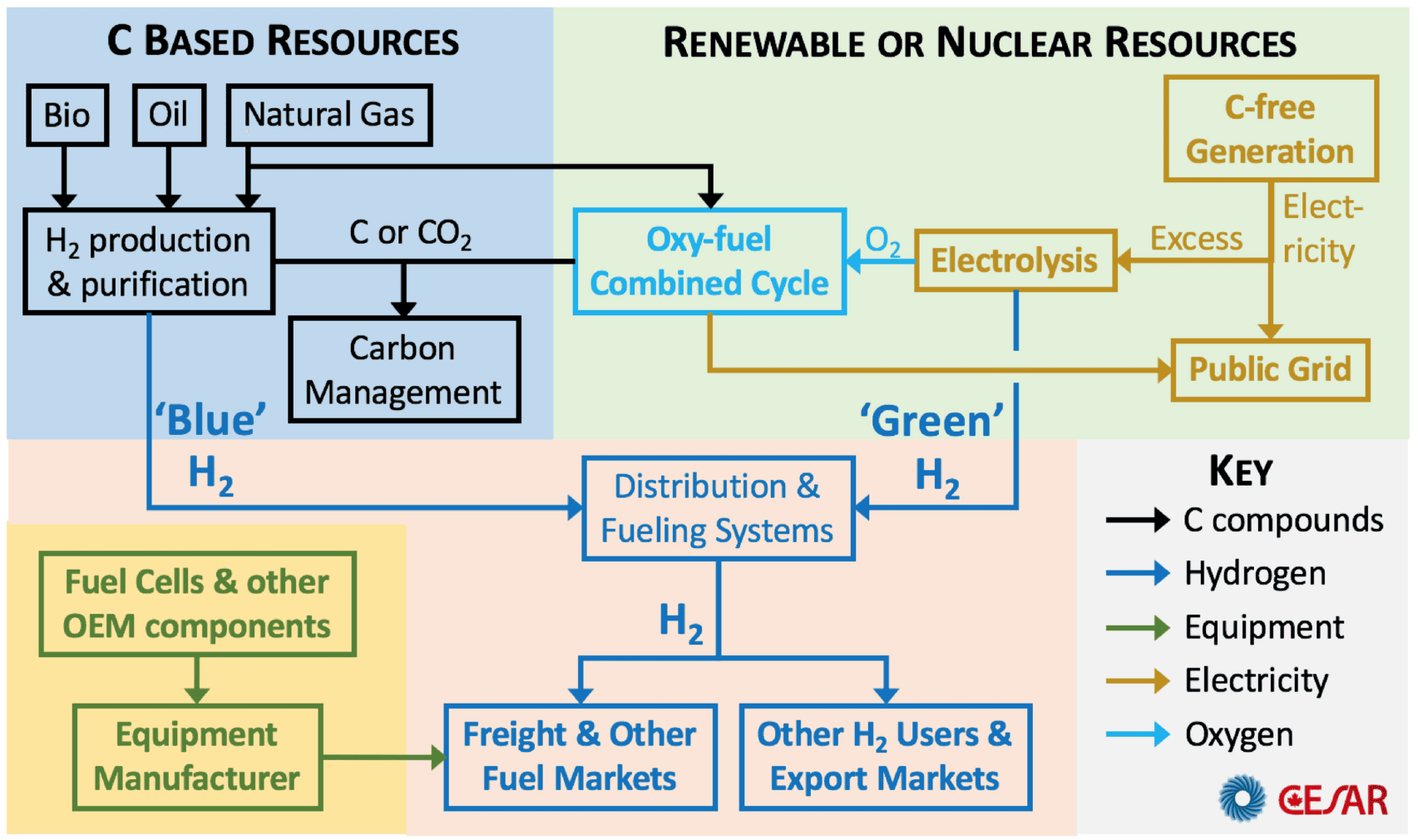 This blog post was first published by Canadian Energy Systems Analysis Research (CESAR) at the University of Calgary.